When I was presented with the opportunity to have an interview series with Brooklyn Magazine, it took me some time to come up with a name. I wanted it to be a reflection of what I was trying to do, but also a reflection of where I was doing it. Though I’m originally from Baltimore and live in Atlanta, my boyfriend is from Brooklyn and currently lives here, so I’m here a lot.

In my frequent travels to Brooklyn, whether it was going to the International African Arts Festival in Commodore Barry Park or grabbing a bite to eat at Peaches in Bed-Stuy, I quickly uncovered the true heartbeat of the dopest borough is its people.

As a long-time listener and supporter of Power 105.1’s award-winning nationally syndicated radio show, The Breakfast Club, I knew I wanted to talk to the Flatbush born, “Do or Die,” Bed-Stuy living, juice-bar owning queen, Angela Yee.

I didn’t know Angela Yee, but I knew one of her best friends, Janeé, who lived in Atlanta with me. I hit her up, told her what I was trying to do, and three and a half weeks later, I was walking into Juices for Life, a juice bar located in Bed-Stuy that Angela opened in 2016 in hopes of giving her community affordable healthy options.

Walking in with her two friends, Angela greeted her staff by name, talked with most of the customers, and greeted me as if we were long lost friends. In the short time that we spent together, I learned that Angela not only loves her borough but and uses her privilege to help where she can. You may hear her five days a week on the radio and think that you really know her, but there are some things that she doesn’t talk about. While I won’t say that she’s a complete open book, we discussed some things that may give you a little more insight into who she really is. 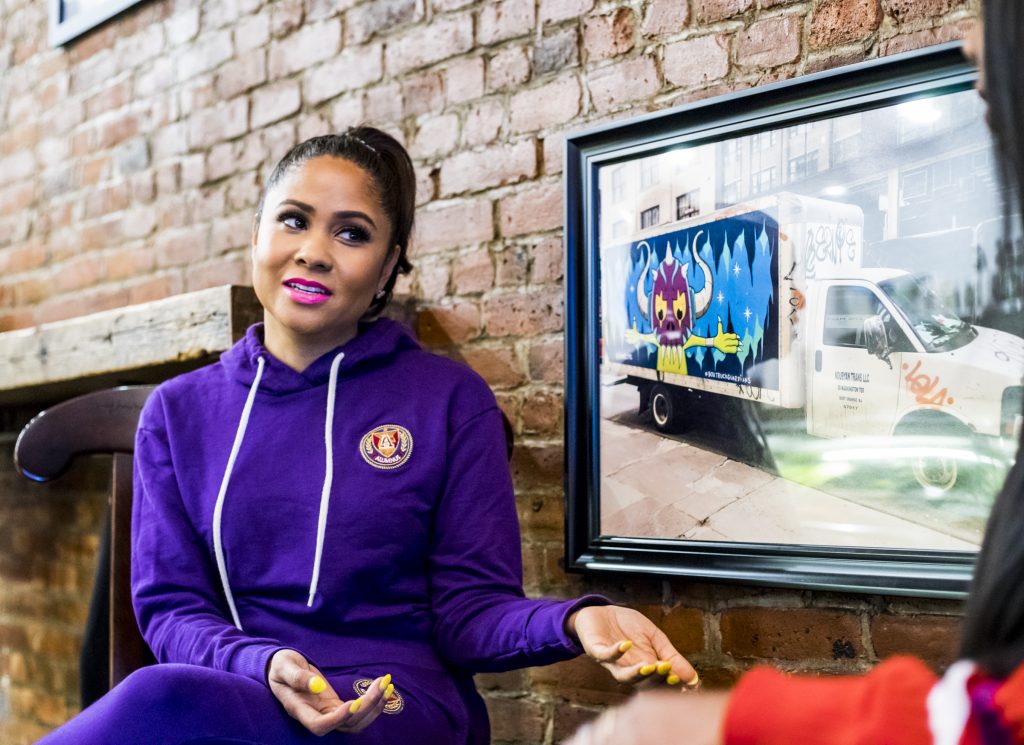 When you think of Brooklyn, what is the first thing that comes to mind?

Flatbush, because that’s where I grew up. All I knew was Flatbush, Brooklyn and Montserrat—the island my mother’s from—for a long time.

Did you ever venture out to other boroughs?

The only reason I started going places was because of this program, I did in the 5th grade, called Prep for Prep in Manhattan. This education program for underprivileged kids which prepares you for college.

You have to take all these IQ tests and interviews to get in. I made it in, and had to go to class on Wednesdays and Saturdays during the school year and Monday through Friday during the summer. It was a whole new world for me, going into the city. So many kids grow up in a neighborhood where they never really leave the circumference of where they are from; that was me.

So, through this program, you get an opportunity to go to private school for free?

Yeah, basically they have you interview, and then you get accepted to one. It’s a way of integrating those private schools with kids who are gifted from urban areas and might not have even thought they had a chance to do that.

So it’s safe to say that Prep for Prep introduced you to New York City?

Yes. It wasn’t just Brooklyn. It was kids from the Bronx, Manhattan and all over. I got to meet people from all the different boroughs. And for the first time ever, I traveled to different places. Then it was like, “Let me go see my friend in the Bronx.” I had never been to the Bronx. That program introduced me to other things and forced me to start getting out.

Prep for Prep provided me with exposure, which is so important. That’s why I always stress education for kids because being a part of a program like Prep for Prep, which pushed education, is the reason why I started learning more.

Let’s switch gears a little. Your dad is Chinese and your mom is from the West Indies. Are both of your parents immigrants?

No, my parents were born here. But their parents, my grandparents, weren’t.

How was it growing up with parents from two vastly different cultures?

My dad is Chinese and he has a huge family. My mom, who’s West Indian, is from Montserrat. She is an only child and does not have a huge family at all. So, it’s interesting because I grew up in Flatbush, which definitely has a large West Indian culture. But, when it came time for holidays, I was with my whole Chinese side of the family. It’s a blessing now, but when I was younger, it was hard because my grandparents on the Chinese side of the family didn’t accept that my mom was black.

Did you have that same acceptance struggle with your friends growing up?

Yeah, it was hard growing up in a black neighborhood and having a Chinese dad because black people had the most jokes about Asian people. My dad was like the only Chinese person in the neighborhood, and they had a lot of jokes—nail salon jokes, Chinese food jokes, a lot of hair store jokes. It was a lot. But I was always very good spirited about it. I think [being teased] actually helped prepare me for a career in entertainment. 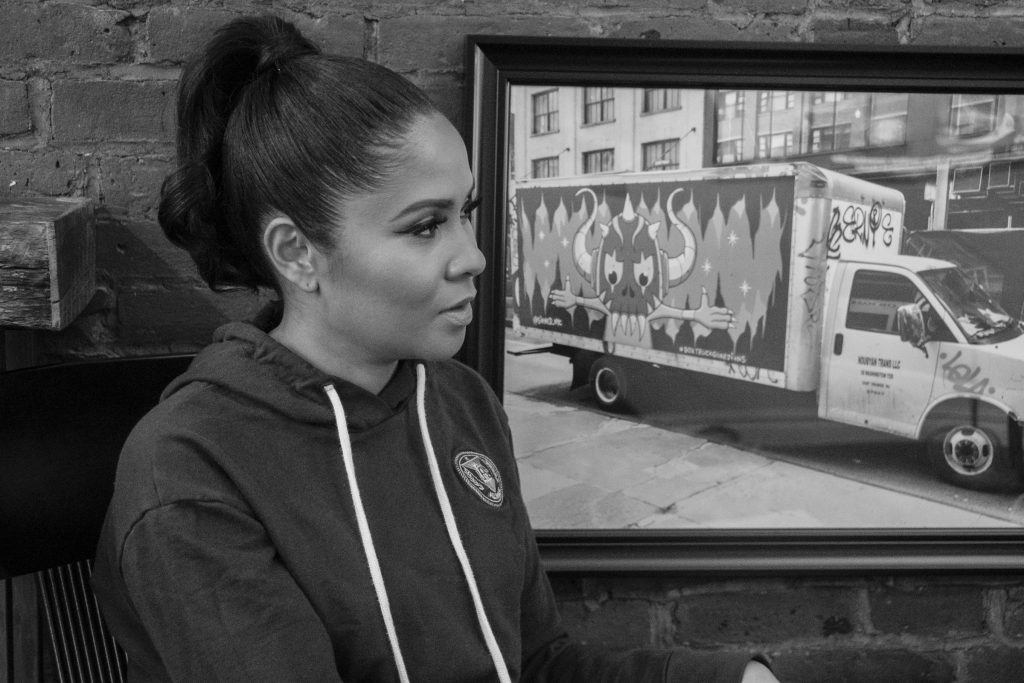 Not to perpetuate stereotypes, but is your dad an entrepreneur? And if so, how did that impact your desire to become a businesswoman?

My mom had the same job since I was young. My dad did too, but he kept getting fired. He now works for my uncle who’s a dentist. He manages the office. I never thought I would make the kind of money that I’ve been making. It’s not something that I ever envisioned. When I was younger, I did a lot of freelance work. I always believed in having side hustles. I would have one main job, and then I’d write bios for someone, write articles, consult, do freelance marketing.

Do you believe that having all of those experiences molded you into the type of entrepreneur that you are?

I think that having all those side hustles and having to manage my time, chase checks and figure it out was the start of me being an entrepreneur. I used to manage artists also, and that’s definitely an independent grind.

I used to work for Wu-Tang. I worked for their management company, and was an assistant to the CEO. After I left there, I went to go work with D’Angelo. When I left, a couple of the guys wanted me to help them with certain things. So, for me it kind of just happened. It’s good money to manage someone if they’re on the road and working.

One of the biggest issues I think people have with managers and people working for them is that you got to be able to trust somebody when it comes to the money. And, I’ve always been a really upfront person. When we went on the road, and when we came back that money was right to the penny, and I had everything written down and logged in. After that, it was like, “okay, manager.” 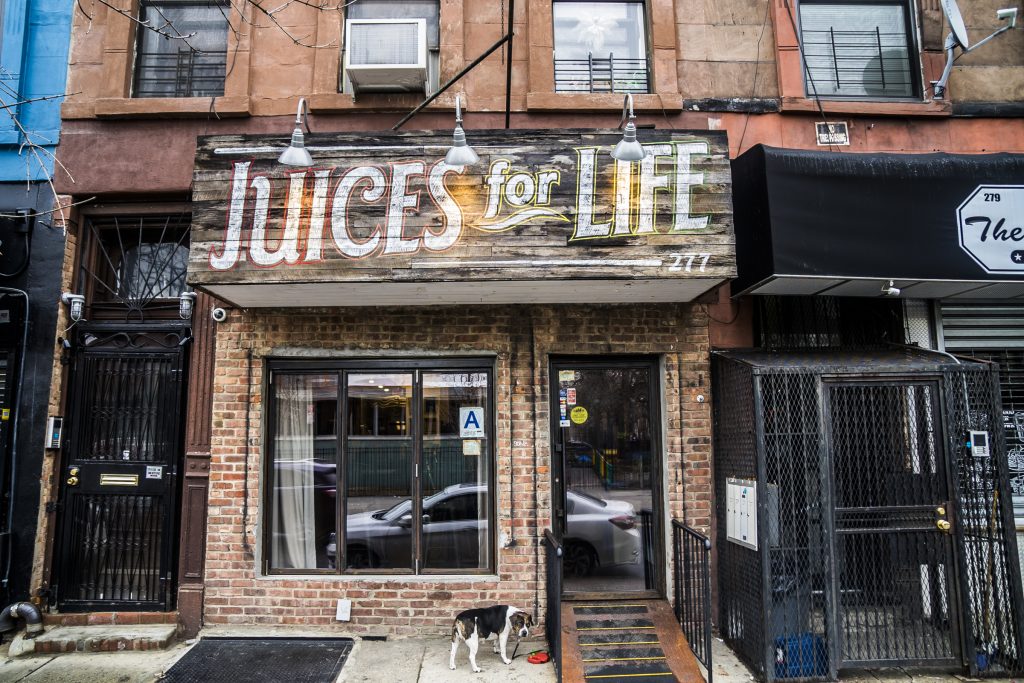 It seems like Brooklyn has given you so much and contributed so much to the person and businesswoman you are today. You can almost look at Juices for Life like your gift to this ever-changing borough. As you see the ways that gentrification is taking over Brooklyn, specifically Bed-Stuy, how does your juice bar play into the gentrification conversation?

When you walk in and hear the music that we play and see everything that we do here, it doesn’t cater to the newly gentrified Brooklyn. It’s what we listen to, what we’ve always listened to—Hip-hop and R&B. People who are new to Brooklyn come in here, and are coming into our world. But, I do want this place to be a meeting ground where it doesn’t matter who you are or what you do.

It definitely appears to be like you’ve built a home for many of those who I have seen come in. People seem very comfortable here. Has this spot become more than a juice bar?

Absolutely. We do Wealth Wednesday’s here once a month, which is free. I do it for everyone to learn more about financial empowerment. Gregg Bishop, Commissioner of the NYC Department of Small Business Services, was just here to share information with the community. His office can help you find a lawyer, and it’s free.

They can help you develop a business plan for free. They can give you training for certain types of work that you need to do. You pay for all of this in your taxes. We did one with Google where they came in and showed people how to do things like Google AdWords to grow their business. And we’re doing another one with Google next month. 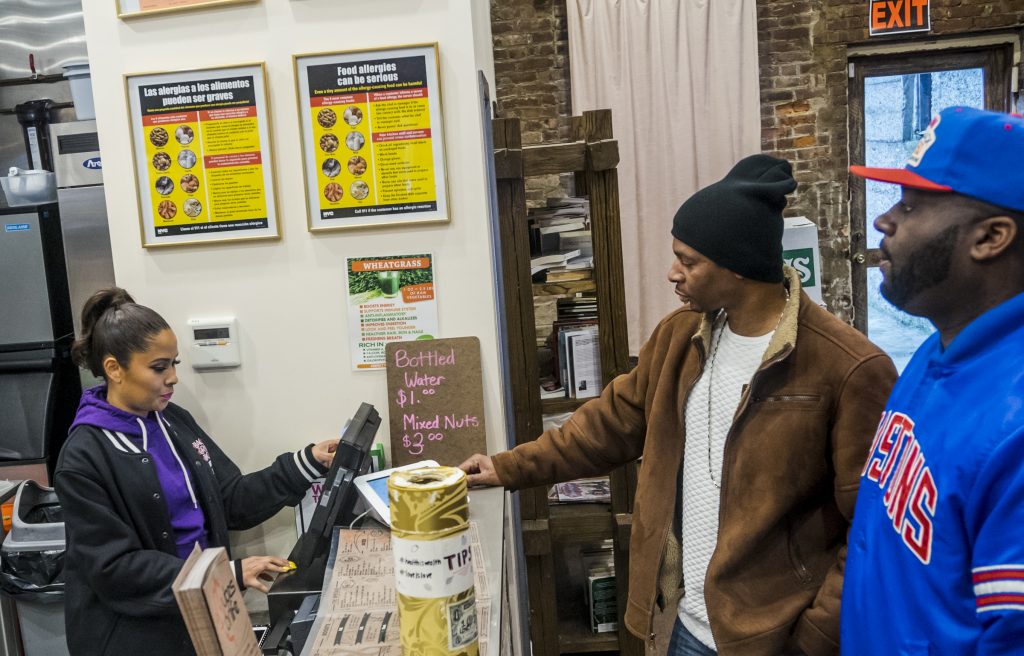 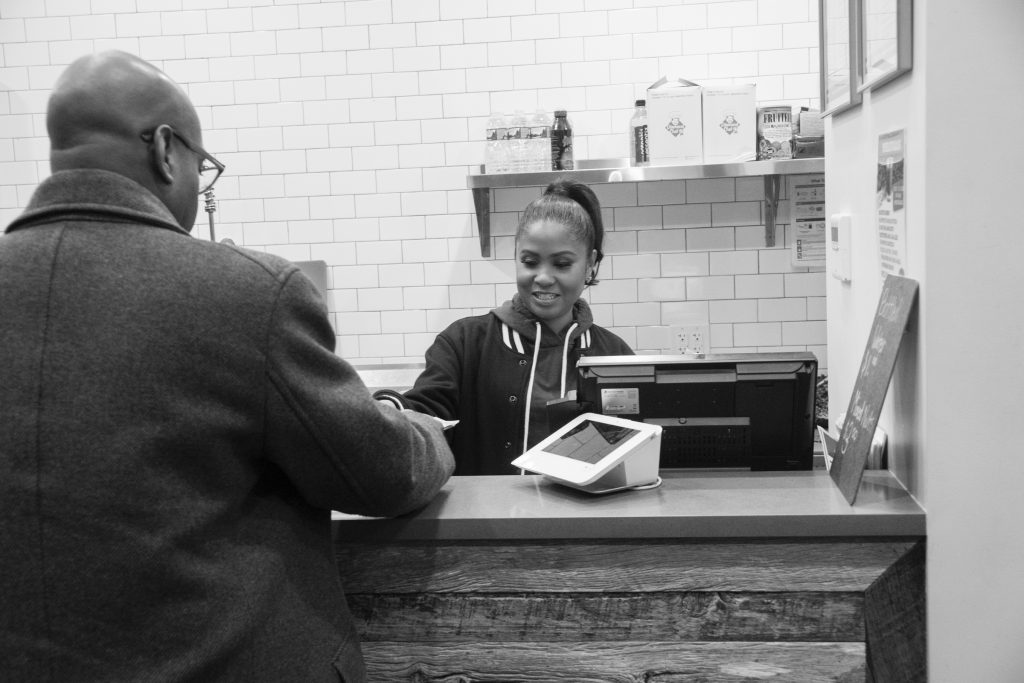 So you’re like a connector for the community. You really got the juice.

I’ve been learning a lot of things ever since I opened a business, and I want other people to learn them too. I want to make it a whole lot easier for others. Some people want to do something and they might put it off for so long. And sharing this could be inspirational for someone to be like, “I’m going to stop putting it off. It can be done.”

You’ve been very successful. What have been some of your biggest challenges?

Being able to balance my social life with my work life. I have never spent enough time doing personal things because work has always come first for me. So, there might be things like relationships that didn’t go the way they could have gone because I work a lot. That has hurt me because I should have placed that same amount of importance into other things. I’m learning to do that balance now.

You may love being at home but you seem to truly love working. Can you share some of your other business ventures?

So we have the juice bar, and of course I have Lip Service. And, we’ve really stepped it up. I’ve been working with Jonny Shipes at Cinematic TV, and he’s been helping me film the episodes and put it together.

I just started working with my friend Akim, who owns The Bakery on Bergen. She has amazing vegan cookies, and even has a vegan rum cake. There’s definitely a market for that because people are trying to be healthier.

I just joined the board yesterday for The American Foundation for the University of the West Indies, which I really like because I can see where the money that I donate is going, and more importantly, I can have a larger impact and truly invest in the kids that need it the most.

The more successful you get, the more that people are going to dislike you. And that’s just so true. So, I’ve learned not to take everything personally, and that has been great advice.

We did an interview today, and everybody’s very mixed about it. Some people are like, “You’re so whack,” and then some people are like, “I applaud you for that.” You can’t ever really please anybody, and if you try to do that then, who are you and what are you? You just have to do what you believe in.

Another thing that I learned, and this is so valuable, is to stop trying to do everything yourself. Life is so much easier when you can put people in places and positions to do great things. 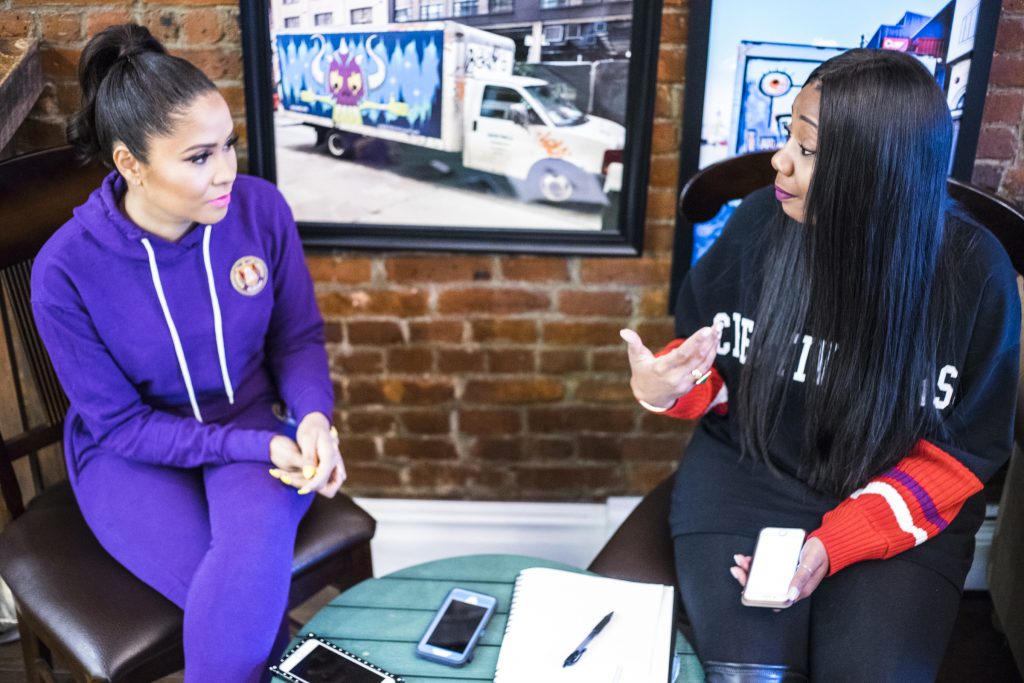 in I Got A Story To Tell 0 comments
Share